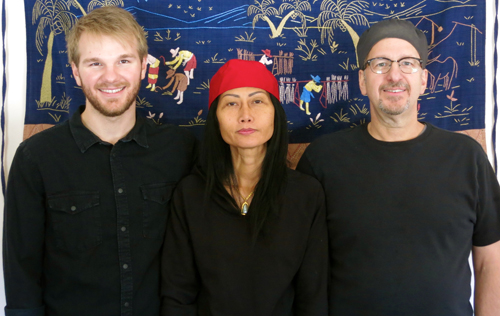 Steve Morgan has enjoyed a successful career for over 36 years in the restaurant industry. His career began at The Partridge Inn in Stowe, VT as a line cook. Since then he has excelled in the industry, having worked as a chef de cuisine at Chez Henri in Waitsfield, VT, executive chef at National Life Insurance Company, and as a chef instructor at New England Culinary Institute, also in Montpelier. Prior to opening Saap, Steve has been working at Gifford Medical Center since 2005 where he is the Executive Chef. He has traveled to Thailand many times to study the cuisine of various regions, learn techniques and flavor profiles unique to Thai cooking. With a passion for Northern Thai fare in particular he seeks to emulate and share the wild, fresh, and fiery flavors of this wonderful region.

Nisachon (Rung) Morgan was raised in a small rural village in northern Thailand, known as the Issan region. Her family business was farming rice and raising livestock. Rung worked for years in the dining room and kitchen of a successful restaurant in Bangkok. She came to this country in 2010 after she and Steve were married. Thai cuisine is complex yet subtle and therefore must be closely and frequently assessed. Rung’s vast insight into the ingredients and cooking methods of this cuisine make her particularly well suited to cook and regulate the authenticity of what we serve at Saap. She has a deep commitment to creating uncompromising, excellent food with persistent attention to detail. Many of her recipes were passed down from family members, and are steeped in tradition as well as uniquely regional and seasonal ingredients.